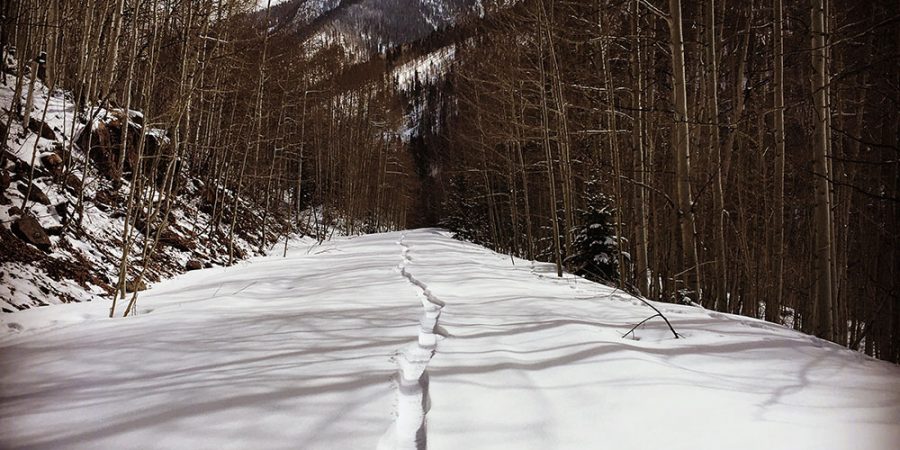 Rico Trails Alliance (RTA) was founded in 2017 to promote local and regional trail systems in and around Rico, Colorado, with a focus on access, development, and use of non-motorized trails. As the snow starts to fall and the snowbike groomer is once again pulled out for the winter season, it’s a great time to reflect on RTA’s 2020 accomplishments. Despite the challenges of the pandemic, 2020 has been a busy year for RTA’s volunteers.

In the winter/spring of 2020, RTA volunteers used our snowmobile and groomer to groom and maintain several miles of singletrack snow trails in and above Rico for fat-tire biking and cross-country skiing. We also held our annual fat bike bash in January, with demo bikes from two shops and which drew nearly 60 riders from across the region. Two RTA volunteers attended a USFS-organized volunteer Trail Crew Leader training program provided by the Volunteers for Outdoor Colorado (VOC). We estimate our volunteers contributed more than 90 hours grooming trails and hosting the 2020 Rico Fatbike Bash this past winter.

RTA’s primary focus in 2020 was trail planning, including securing an easement for the Town of Rico across private property along the historic Rio Grande Southern (RGS) railroad grade south of Rico and gathering public support and comments for the Rico Trails Project, which includes trail designation and improvements on the Circle Trail, Ryman Trail, and RGS from Rico to the Dolores-Montezuma County line. For the RGS easement, RTA’s volunteers conducted site walks with the property owner to understand the owners’ needs and mapped a suitable trail route. RTA’s volunteer surveyor and legal counsel surveyed and drafted the easement through multiple iterations before the final easement was signed into effect by the property owner and the Town of Rico. RTA’s 2020 support for the Rico Trails Project included gathering and providing comment to the USFS on the Draft Environmental Assessment, Revised Draft Environmental Assessment, and Draft Decision. RTA also conducted planning for a skills trail project within the town of Rico, presented the project to the Town of Rico Board of Trustees twice, and gathered public input on the trail. RTA estimates its volunteers contributed more than 60 hours to trail planning in 2020.